In the early stage of the production and investigation of the single-box-shaped cartoning machine , it was found that when the carton is unfolded, the difference between its internal space size and the size of the filling material is very small, as shown in Figure 1 due to the influence of the side tongue of the carton , Causing the push to fail.

In order to solve the above problems, in the study of this article, the cartoning process of the cartoning machine will be redesigned. The newly designed cartoning process is similar to that of the traditional cartoning machine. The only difference is the addition of a pre-opening side tongue. Process, pre-open the side tongue of the carton before pushing the material to solve the problem of the failure of pushing the material. The specific process route is shown in Figure 2. 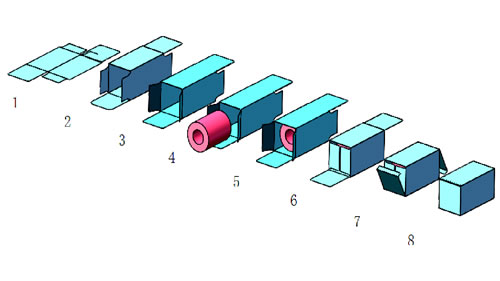